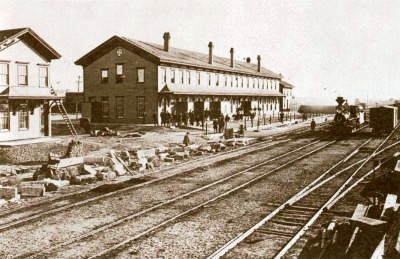 Laramie, Wyoming, grew from a small town along the railroad to a major western city. Early passengers paused at railroad hotels and eating houses such as this one for meals, rest, and perhaps a side trip to hunt buffalo.
Union Pacific Railroad Museum Collection

In the turbulent 1870s and 1880s, people throughout the United States came to regard railroads with a mixture of admiration and hatred. The Credit Mobilier scandal provides but one example. Certain officers of the Union Pacific formed a separate construction company to raise capital and ensure that influential backers received a suitable return on their investment -- which in one year alone totaled 348 percent. Investigations held after the scandal broke in 1872 revealed that key congressmen had accepted Credit Mobilier stock as a gratuity. Ulysses S. Grant and future President James A. Garfield were among those implicated.

Rate wars and rate discrimination were other examples of the railroads "not playing fair." In a vicious cycle leading some railroads to near-ruin, competing lines would undercut each other's rates to capture traffic. Conversely, railroads often charged whatever the traffic would bear, without regard for what seemed reasonable to the traveler or shipper. Some companies granted rebates or kickbacks to powerful shippers such as John D. Rockefeller and Standard Oil.

The unfairness of these practices so enraged the public that Congress created the Interstate Commerce Commission in 1887 to bring some order to the unruly industry. This marked the first time the federal government attempted the direct regulation of American business.