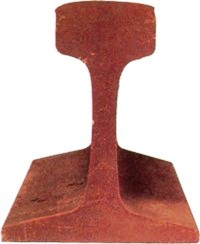 More than a hundred years separates this section of rail from the one below, yet laid at the proper width, both could carry the same train. The standard "T" rail came in many different sizes and remains standard to this day.
Hans Halberstadt

The Central Pacific and Union Pacific were not long without competitors. In 1864, President Lincoln signed a bill authorizing the construction of the Northern Pacific Railroad from the upper Great Lakes to the Pacific Northwest. A generous land grant of nearly 60 million acres provided collateral for construction mortgages and new lands for Easterners and immigrants hungry for a new life. A lavish gold-spike ceremony marked the completion of this second transcontinental railroad on September 8, 1883.

Just ten years later the indomitable James J. Hill completed the parallel Great Northern Railway, built to the highest standards without government subsidy. It also linked Chicago and the Great Lakes with the forests, farms, and ports of Oregon and Washington. Both railroads reached up into Canada, providing an impetus for the construction of a true Canadian transcontinental.

By the time Canada attained partial independence from Great Britain in 1867, it had a little less than 2,500 miles of track, mostly in the East. The American transcontinental railroads posed a real threat to the young Dominion of Canada, for its western provinces -- most notably British Columbia -- demanded the completion of a true Canadian cross-continent railroad as a condition of continued participation in the confederation.

After a few false starts, the Canadian Pacific Railway in 1881 began an astounding push west across the Canadian Rockies that would tie the two oceans with yet another rail route in just four years. A poster celebrating the 1885 feat summed up Canada's feelings: "A Red Letter Day . . . Our Own Line . . . No Customs, No Delays, No Transfers, Low Rates, Quick Time." As in the United States, the railroad helped make Canada one country.

Throughout the 1880s, another round of railroad fever swept the United States, as Chicago claimed the title of "Railroad Capital of the World" and former frontier outposts such as Denver and Kansas City became bustling railroad centers. Before long, the reach of railroads provided a truly nationwide market for industrial and agricultural goods, allowing regional economic specialization. For example, steel-making concentrated in the area around Pittsburgh, while the Northern Plains states engaged in large-scale grain production.

Southern railroads worked hard to rebuild so they could connect with the burgeoning national system. At the end of May of 1886, every railroad in the South not built to standard gauge made a marathon effort to change tracks, cars, and locomotives to the national standard of 4' 8½". Over a few days, thousands of men shifted rails and moved wheels on their axles to make it possible for true car interchange throughout the nation.

The bell-pattern spike maul remains one of the most basic and useful tools on the railroad. The long head allows the hammer face to strike the spike over the top of the rail, while its considerable weight helps drive the spike home.
Sanderson Photography, Inc.

Mineral wealth in the West lured iron rails to the most remote and inaccessible corners of the land. Between 1860 and 1890, Nevada's Comstock Lode alone yielded $340 million in gold and silver. Railroads carried machinery and consumer goods in, ore and metal out, and thousands of treasure seekers in both directions.

Gen. William Jackson Palmer built a Colorado railroad empire to the innovative gauge of three feet between the rails. By century's end, narrow-gauge tracks reached across the Continental Divide at elevations in excess of 10,000 feet to link remote mountain mining towns like Monarch, Ouray, Telluride, and Aspen with cosmopolitan Denver.

Gold also spurred impressive feats of railroad construction in Montana and Idaho, Eventually, less glamorous (but equally valuable) metals such as lead, copper, and nickel, supplemented the boom-and-bust precious metals economy and made yet another generation of miners and railroaders wealthy.

Railroads also opened up the Southwest, where men sought fortunes in cattle, cotton, and wheat. The Atchison, Topeka & Santa Fe Railway completed a through-line from Chicago to the Pacific coast in 1884, the same year Collis P. Huntington and Leland Stanford-two of the "Big Four" who built the Central Pacific-finished the Southern Pacific Railroad from Los Angeles to New Orleans. Finally, the main lines envisioned by the Pacific Railroad Act of 1854 were in place. At about that time, Yankee railroaders turned their attention to Mexico.