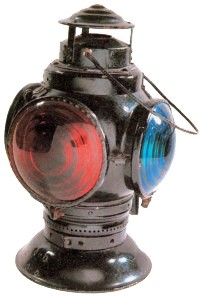 Railroads developed elaborate rules for the safe operation of trains. Lanterns and color signals played a large part in those rules, this is a rear-end marker lamp, used to identify the back end of a train.
John B. Corns

Americans traveled more than Europeans even before the coming of the railroad. After the Civil War, they created the most mobile society the world had ever known. But it was not without risk or accident. Until the 1850s, serious railroad accidents had been relatively rare, and the few that did occur -- such as the 1853 Norwalk disaster, in which a train ran through an open drawbridge, killing 45 persons -- usually were the result of a combination of human error and unusual circumstances. That changed as the general pace of life in America accelerated and trains became faster, longer, and more frequent, reducing the margin for error.

The public responded with increasing alarm to railway disasters such as the 1871 Revere, Massachusetts, collision, which killed 29 and seriously injured many more, and the Ashtabula, Ohio, wreck of 1876, which left 80 dead. Even though steamboat accidents killed many more passengers, they were thought to be acts of God. Railroad wrecks were sensational and thought to be examples of human failure or the consequences of corporate greed. It took railroads several decades to improve train-control practices and adopt safety devices sufficient to make railroad travel truly safe.