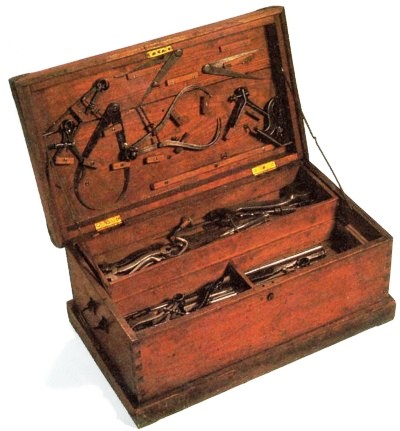 Railroad machinists learned their craft as apprentices, and they often made their own tools and the cases to store them. This chest represented thousands of years of skill distilled into hard-won "finger knowledge."
Sanderson Photography, Inc.

Eli Janney, a Civil War veteran and store clerk in Alexandria, Virginia, conceived and patented the first "knuckle" coupler in 1868. His design, the basis for the couplers of today, resembled two hands clasped together when joined. Able to close and lock automatically, they could be opened from the side of the car, greatly reducing the number and severity of casualties suffered by brakemen using the treacherous link-and-pin couplers. By the 1890s, there were many different styles of so-called Janney couplers in use, but many of them would not join with each other. A prudent conductor might have to carry a dozen different spare "knuckles" on his caboose.

In 1869, George Westinghouse patented his first air brake. By 1873, he had developed the triple valve, the key component in the creation of an "automatic" air brake. Instead of using compressed air directly from the locomotive to provide the force for pressing brake shoes against the wheels, his system placed a reservoir of air under each car and charged them from a continuous brake pipe linked to the locomotive. That way, if the air pump failed or the train parted, air stored on each car could apply the brakes automatically -- an especially useful fail-safe feature.

During competitive trials in 1887-1888, the Westinghouse design proved so superior that it was made the universal standard. It was adopted early for passenger trains, but it took an act of Congress (the Railway Safety Appliance Act of 1893) to force the railroads to speed its application to freight trains. The air brake was perhaps the most important single railroad invention of the period.

The B&O's division locomotive shop complex at Martinsburg, West Virginia, represents a typical midsized railroad facility of the 1870s. The covered roundhouse was a garage for engines; the rectangular buildings housed workshops and machinery.
B & O Railroad Museum

George Pullman, who had vastly improved the quality of sleeping and dining cars, popularized the vestibule for passenger cars beginning in 1887. Previously, cars had open platforms, making it dangerous to cross from car to car when the train was in motion. The vestibule enclosed the platform and joined the cars with the familiar flexible-canvas diaphragm, making the train into one continuous unit and encouraging the development of specialized lounge, dining, and other cars.

A German tinsmith by the name of Julius Pintsch devised a lighting system based on compressed petroleum gas. It gave brighter light with less smoke than the old kerosene lamps. Advances in hygiene (water coolers, flush toilets), comfort (window screens, larger and better-ventilated berths), and safety (anti-telescoping devices, stronger wheels) made rail travel more safe and comfortable for all passengers.

Freight trains grew longer and more productive, with larger cars operating at higher speeds. Coal drags might still be run at a leisurely 15 miles per hour by the 1890s, but perishable freight such as fruit and livestock might wheel along at 40 or even 50 miles per hour. Throughout the 1860s and '70s, railroads adopted the caboose, giving brakemen and the conductor some shelter and safety, and in the process creating a symbol of American railroading. The increasing use of iron and steel in freight cars, as well as new types of cars -- such as tank cars for the transport of petroleum used to make lamp fuel -- dramatically changed the very nature of freight transportation. By the last quarter of the century, it was possible to ship almost anything, almost anywhere, by rail.

Locomotives, too, grew larger and more sophisticated. A new generation of trained mechanics and engineers virtually reinvented the locomotive and made railroading the "high technology" of its day. The highly decorated wood-burning 4-4-0s of the Civil War evolved by 1900 into starkly black, no-nonsense coal-burning behemoths weighing twice as much. By 1900, builders in the United States, Canada, and Mexico had turned out more than 70,000 locomotives of all shapes, sizes, and types.

Elijah McCoy was one of several black inventors and mechanics active in the railroad industry. Advertising for the mechanical lubricator he developed gave us the expression "the real McCoy." Other inventors relentlessly pursued the quest for more power, more speed, and greater efficiency. Railroading was an industry in which small economies added up over the long haul, so the locomotive was subject to constant tinkering.