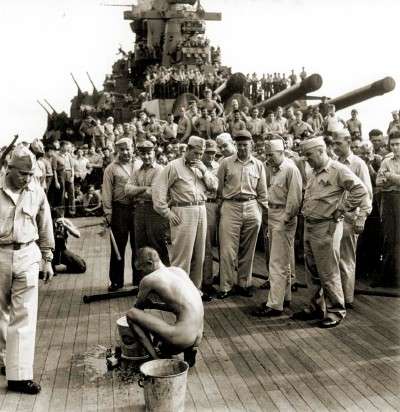 As the end of World War II approached, the Allied forces continued to attack Japan and Nazi Germany with large-scale bombing campaigns. The World War II timeline below summarizes important events that occurred during the war from March 14, 1945, to March 23, 1945.

March 18: Nearly 30 Allied planes are lost in large-scale bombing runs over the German cities of Frankfurt and Berlin.

March 19: Adolf Hitler issues the "Nero Decree," a scorched-earth directive calling for the destruction of all German infrastructure presumed in danger of falling to the Allies.

The Sarawak Maru, the final surviving ship of a 21-vessel Japanese convoy, is sunk, illustrating Allied strength and Japanese isolation in Asian waters.

March 20: Adolf Hitler appears in public for the last time. ­

The fiercely defended Burmese city of Mandalay is captured by Allied forces of the British 19th Indian Division.

March 21: More than 100 Danish civilians die when they become "collateral damage" in a British raid against Copenhagen's Gestapo headquarters.

Japanese piloted bombs make their debut against U.S. forces in the waters off Japan's home islands.

March 23: Charles de Gaulle announces that France will grant limited independence to Indochina at the conclusion of the war.

Allied forces from Britain, Canada, and the United States under General Bernard Montgomery launch Operation Plunder. They will cross the northern Rhine while protected by heavy air and artillery support.

Below are more highlights and images that outline the events of World War II and show the details of American troops landing on Okinawa, as well as the American discovery of Nazi Germany's hidden treasures in 1945.

German V-weapons are difficult to aim with precision: German V-1s and V-2s were fired at targets in England, Belgium, and France (after liberation) and even within Nazi Germany. Although they could wreak extensive damage, neither type of rocket could be precisely aimed. The British put out false reports about hits, sometimes tricking the Germans into targeting less populated areas. The only defense against the more sophisticated V-2s was to take out their launchpads. The Allies struck bunkered sites in France, Belgium, and the Netherlands, although V-2s on truck-drawn mobile launchers proved hard to hit.

Americans land on Okinawa in the largest invasion of the Pacific War: GIs of the U.S. 77th Infantry Division use spliced ladders to bridge a gulch during the fighting on Okinawa. Intending to seize a base for the invasion of Japan, the Americans landed on Okinawa on April 1, 1945. It was the largest invasion of the Pacific war. The Navy fired more than 100,000 shells in a weeklong bombardment of the landing beaches. This expenditure was largely wasted, since Japanese general Ushijima Mitsuru had decided to fight from prepared positions inland. The initial landings by four U.S. divisions were virtually unopposed, but progress stalled when U.S. forces encountered the main defenses across the southern end of the island.

Japanese defenders dig to protect themselves from U.S. attack: A flamethrower tank clears Japanese snipers from caves on Okinawa. Dug deeply into Okinawa's ridges and escarpments, the Japanese were protected from even large-caliber artillery fire while taking a heavy toll of Americans who attacked in the open. By staying in their defenses, the Japanese intended to make U.S. troops pay dearly for every foot of ground while kamikazes battered the ships offshore. GIs and Marines countered with tanks and small-unit assaults. The latter included flamethrowers and demolitions to eradicate subterranean enemy positions -- a tactic that became known as "blowtorch and corkscrew."

Japanese prisoner becomes an object of curiosity: Crewmen on the USS New Jersey watch a Japanese prisoner of war bathe before being issued GI clothing. The relative rarity of Japanese prisoners made them an object of curiosity among Allied servicemen -- particularly those who were not directly engaged in infantry combat with enemy troops. Many U.S. servicemen were surprised to find that their enemy was not a superman, a monkey, or a slavering madman, but just an ordinary man much like themselves. Some even felt a degree of sympathy for their now helpless foe. This was not a sentiment shared by most front-line riflemen. With their personal safety in the balance, they had little room for curiosity or compassion for live Japanese.

Americans find $520 million of Nazi buried treasures: As U.S. troops advanced through Central Germany in early April 1945, they learned from informants that the Nazis had moved gold and art treasures to a salt mine (pictured) in the town of Merkers. On April 7, American officers accompanied German mining officials to the main vault more than 2,000 feet below ground. Blocked by a large steel door, they blew a hole in the wall and entered a vault 75 feet wide, 150 feet long, and 12 feet high. It contained thousands of bags of gold, silver, and coins worth more than $520 million -- as well as hundreds of pieces of jewelry and priceless art treasures that had been looted all over Europe.

As the U.S. Army closed ranks around the economically critical Ruhr region, more than 300,000 German soldiers are entrapped. The following page features a detailed timeline highlighting this and other important World War II events that occurred from March 23, 1945, to April 1, 1945.