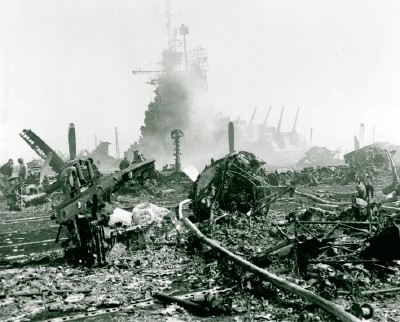 After Nazi Germany was defeated in Europe, World War II fighting continued in the Pacific. The U.S. military leadership determined that Operation Olympic, the invasion of mainland Japan, would commence on November 1. The World War II timeline below summarizes important events that occurred during the war from May 17, 1945, to May 28, 1945.

May 17: U.S. forces capture Manila's Ipo Dam following a three-day bombing campaign in which more than 100,000 gallons of napalm were dropped on Japanese positions.

May 18: An intense, 10-day battle on Okinawa ends when the U.S. Marines capture the hotly contested Sugar Loaf Hill.

May 19: Nazi functionary Dr. Alfred Rosenberg is captured. Rosenberg had promoted the belief in Aryan racial superiority and the need for German Lebensraum (living space).

May 21: A division between Britain's Labour and Conservative parties leads Winston Churchill to call for general elections for the first time in a decade.

May 23: Reichsführer Heinrich Himmler commits suicide while in British custody.

Julius Streicher, the fanatical anti-Semitic publisher of the Nazi periodical Der Stürmer, is arrested in Bavaria.

General Eisenhower orders the arrest of leaders of the German military and of the new Flensburg government headed by Admiral Dönitz.

The U.S. military leadership determines that Operation Olympic, the invasion of the Japanese mainland, will commence November 1.

May 27: Up to 200,000 Japanese troops are stranded when the Chinese reoccupy Nanning, cutting the Japanese supply route from Southeast Asia.

USAAF planes deliver the Chinese Sixth Army from Burma to China, marking the first airborne transport of an army in world history.

May 28: British radio personality William Joyce ("Lord Haw-Haw") is captured by the Allies.

Shipping rules for wartime are abolished everywhere outside the Pacific. Merchant traffic is allowed to use navigation lights, and abandon convoys.

Below are more highlights and images that outline the events of World War II and show the details of the liberation of the Channel Islands, as well as the American starvation experiment.

Kamikazes strike the USS Bunker Hill and kill 346 servicemen: Wrecked aircraft litter the USS Bunker Hill's flight deck after the carrier was struck by two kamikazes on May 11, 1945, off Okinawa. The first enemy plane careened through parked aircraft on the flight deck, igniting numerous fires while its 550-pound bomb exploded below decks. The second kamikaze hit near the base of the ship's aft deck. Fires were brought under control within five hours, but casualties totaled 346 dead and 246 wounded. The damage put the veteran carrier out of the war. It eventually returned to duty in September with the "Magic Carpet" fleet, transporting servicemen back to the States for discharge.

The liberation of the British Channel Islands takes place in May 1945: In July 1940, the Germans easily seized and occupied the British Channel Islands. Under Adolf Hitler's orders, the islands were heavily fortified and became the sites of slave labor camps for European prisoners of war. Ironically, the islanders' worst sufferings came after the Allied invasion of Normandy, when they were cut off from food and other supplies from Europe. The islands were not liberated until May 1945, after Nazi Germany's surrender. Elated civilians on one of the Channel Islands eagerly greeted British troops.

Surrender leaflets encourage Japanese to surrender in 1945: This is one of millions of leaflets dropped among Japanese soldiers and civilians to encourage surrender. The I Cease Resistance phrasing was developed after it was discovered that Japanese soldiers were alienated by any mention of actual surrender. Leaflets were produced and printed by the Office of War Information and by the Far Eastern Liaison Office and Psychological Warfare Branch in the South West Pacific Area command. Early efforts brought few surrenders, but results improved dramatically in 1945, both because of deteriorating Japanese morale and a growing willingness among Allied troops to take live prisoners.

The American starvation experiment aids doctors in understanding how to treat emaciated victims: Beginning in November 1944, Dr. Ancel Keys of the University of Minnesota worked with 36 conscientious objectors in the first study of the effects of semi-starvation. Receiving an average of about 1,500 calories a day from their fourth to 10th month of the yearlong experiment, the volunteers experienced significant changes in both their health and personalities. During the last three months, the men received from 2,000 to 3,000 calories daily, with the number increasing over time. It was learned that vitamins and proteins did not help on their own. The proper diet to nurse emaciated victims back to health consisted of about 4,000 calories a day.

Heinrich Himmler's final days conclude with his suicide: On April 28, 1945, Adolf Hitler learned that his trusted lieutenant, Heinrich Himmler, had tried to negotiate the surrender of the German army to the Allies. Incensed, Adolf Hitler ordered Heinrich Himmler's arrest. Following Adolf Hitler's suicide, the Führer's successor, Grand Admiral Karl Dönitz, denounced Heinrich Himmler. Hunted by Allied agents, Heinrich Himmler disguised himself as a sergeant major and attempted to flee to Bavaria. Although he shaved his mustache and wore a patch over his left eye, he was arrested and eventually identified. To escape his trial and inevitable execution, he killed himself by swallowing a cyanide capsule on May 23, 1945.

Cologne, Germany, takes a beating from numerous Allied bombings: The Allied bombing of Cologne, Germany, began in March 1942. During the war, the city was attacked by air numerous times, primarily because it was a military, economic, and manufacturing center along the Rhine River. The most destructive of the raids occurred on the night of May 30-31, 1942, when more than 1,000 planes of the Royal Air Force dropped about 1,500 tons of explosives on the city in only 75 minutes. By war's end, more than 20,000 Cologne civilians had been killed or wounded and most of the city was destroyed, leaving tens of thousands of civilians homeless.