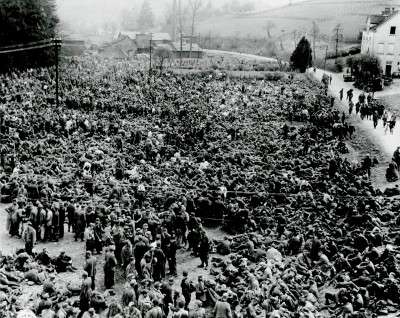 Allied troops advanced so quickly across Nazi Germany during their World War II ground campaign that many SS guards in slave and concentration camps were unable to escape and were immediately arrested by the Allies. The World War II timeline below summarizes important events that occurred during the war from April 9, 1945, to April 15, 1945.

April 11: Red Army troops of the Ukrainian army group penetrate the center of the Austrian capital of Vienna. It will fall to the Allies on the 13th. ­

April 13: The South American nation of Chile joins the Allies and declares war on Japan.

April 14: The Allies march through the center of encircled German troops in the Ruhr Pocket, taking prisoners and splitting the German ranks.

The Allies launch Operation Teardrop in an effort to locate German U-boats in the North Atlantic rumored to be carrying V-2 rockets to be used against New York City.

April 14-15: Japanese imperial loyalists crush an attempted coup by hard-line military officers who, convinced that Emperor Hirohito was on the brink of surrender, had decided to seize control.

April 15: The Bergen-Belsen concentration camp, with a survivor population of 40,000, is liberated by the British Army.

Below are more highlights and images that outline the events of World War II and show the details of concentration camp prisoners identifying camp officials, as well as Allied forces surrounding the Ruhr Pocket in April 1945.

Civilians in Gardelegen, Germany are forced to bury camp victims: On April 21, 1945, American troops of the 102nd Division ordered the males of the German town of Gardelegen to carry spades and white wooden crosses to a burned barn on the outskirts of their town. They were ordered to disinter and rebury the bodies of 1,016 prisoners who had been burned or shot by the Germans eight days earlier. Throughout occupied Nazi Germany, the Allies forced German civilians to confront the atrocities that took place in concentration camps short distances from their homes. Women were also forced to bury slave workers executed by German troops.

Liberated prisoners identify SS guards for Allied troops: Allied troops advanced so quickly across Nazi Germany that many SS guards in slave and concentration camps were unable to escape. Others chose to face the enemy instead of running away. Those guards who remained behind were immediately arrested once the Allies arrived. Liberated prisoners were asked to identify camp officials or brutal guards still in the camp. Other prisoners were taken to neighboring towns in an attempt to identify SS troopers who had abandoned their uniforms in an attempt to mingle with civilians.

Allies, German soldiers, and civilians surround the Ruhr Pocket: As the Allies advanced into western Germany in 1945, General Eisenhower ordered U.S. and British forces to surround Nazi Germany's main industrial region, the Ruhr. On April 1, what came to be called the Ruhr Pocket was surrounded, along with millions of civilians and hundreds of thousands of German soldiers, including the prisoners seen here. During the course of the month, U.S. forces entered and seized the pocket. They found the "armory of the German Reich" reduced to ruins from Allied area bombing. The demoralized population faced years of grueling reconstruction.

In April 1945, Adolf Hitler announced that he expected his officers to fight to the death, and he ordered the execution of any officer who orders a retreat. The next page features a detailed timeline highlighting this and other important World War II events that occurred from April 16, 1945, to April 26, 1945.

A major portion of Nazi Germany's coal, steel, and iron -- all vital to the nation's war effort -- was produced in the Ruhr, a region in western Germany. These industries were centered in Bochum, Dortmund, and Essen. Krupp of Essen was Nazi Germany's principal armaments manufacturer.

The Allies knew the importance of the Ruhr, so the area was subjected to intensive raids from the earliest days of the Allied strategic bombing offensive. Five years of bombing took a heavy toll, and by spring 1945 much of the Ruhr's industrial production ceased completely for protracted periods. Moreover, the destruction of canals and railroads meant that anything that was produced could not be out-loaded.

On February 22, 1945, in preparation for an Allied ground envelopment of the 320,000 German troops still manning their defensive positions in the Ruhr, the Allied air forces destroyed most of the area's remaining rail network. Then on March 11-12, the RAF dropped almost 1,000 tons of bombs on Essen and Dortmund. The RAF and USAAF also destroyed all the remaining road and rail bridges that provided access to the region. Before winter was over, the Third Reich's industrial heartland, its Wehrmacht defenders, and some four million civilians were effectively isolated within the Ruhr Pocket.

On March 25, the Second British Army, Ninth U.S. Army, and First Canadian Army of Field Marshal Montgomery's 21st Army Group struck north and east of the Ruhr. In addition, General Bradley's 12th U.S. Army Group advanced eastward from the south, spearheaded by General Hodges' First U.S. Army and General Patton's Third U.S. Army. The Allied advance was rapid, and -- despite a concerted German attempt to break out -- soldiers of the First and Ninth U.S. armies linked up near Lippstadt on April 1. They thereby closed the Ruhr Pocket and neutralized the thousands of German troops trapped inside it.