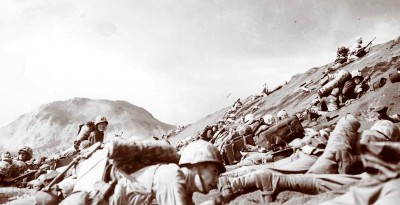 One of the bloodiest battles of the Pacific in World War II transpired when tens of thousands U.S. Marines stormed the Japanese-held island of Iwo Jima. The World War II timeline below summarizes important events that occurred during the month of February 1945.

February 13-15: The Allies unleash a devastating attack on Dresden, Germany, killing more than 30,000 in a bombing raid that triggers intense firestorms.

Aircraft carriers attached to the U.S. Navy's Fifth Fleet, along with dozens of support ships, launch a series of air raids over Tokyo.

February 17: Some 170 U.S. Navy frogmen lose their lives in an ill-fated effort to thwart Japanese beach defenses on Iwo Jima.

February 18: General Ivan Chernyak-hovsky, 39, one of the youngest Red Army generals to command a front during World War II, dies of wounds received in combat.

February 19: One of the bloodiest battles of the Pacific war ensues when 30,000 U.S. Marines storm the Japanese-held island of Iwo Jima.

Allied troops breach the Siegfried Line in Nazi Germany and reach the banks of the Rhine River.

Twenty-three American aircraft are lost when some 1,500 bombers and fighters attack infrastructure targets in Nuremberg, Germany.

February 23: The USS Henry Bacon becomes the last Allied merchant ship to go down at the hands of the Luftwaffe when it is sunk in the Arctic Sea by German bombers.

Below are more highlights and images that outline the events of World War II and show the details of the treatment of American POWs in Japanese custody, as well as the battle of Iwo Jima in the mid-1940s.

Japanese troops kill and rape thousands during the "Manila Massacre": The burned corpse of a Filipino civilian murdered by Japanese troops lies in a Manila street, his hands still tied behind his back. Trapped by U.S. forces and facing certain death, Japanese naval personnel in Manila ran amok, butchering and raping thousands of helpless civilians. "I saw the bodies of priests, women, children and babies that had been bayoneted for sport...by a soldiery gone mad with blood lust in defeat," recalled Filipino editor Carlos Romulo. An estimated 100,000 civilians perished in what became known as the "Manila Massacre."

American POWs suffer while in Japanese hands: Liberation came too late for many sick and malnourished American POW at the Davao Penal Colony on Mindanao in the Philippines. One American POW died while trying to get a drink of water from a sink in the camp hospital. Of the approximately 25,000 U.S. troops captured during the war -- most during the first months after Pearl Harbor -- more than 10,000 died while in Japanese hands. Lack of adequate food and medical care, disease, forced labor, and outright murder all contributed to the toll. Japanese racism and a disdain for surrendered soldiers virtually ensured that the welfare of Allied POWs would remain a very low priority.

Marines land on Iwo Jima and suffer severe casualties: U.S. Marines hug a sandy terrace under enemy mortar fire after landing on Iwo Jima on February 19, 1945. Americans hoped to seize the island, located only 660 miles south of Tokyo, to eliminate a source of interference with B-29 raids from Saipan. They also wanted to provide a refuge for crippled bombers on their way home from Japan. The Marines found that the three-day preliminary naval bombardment had done little damage to Iwo Jima's 21,000 defenders, who had literally moved underground into a maze of tunnels and shelters. Japanese gunners waited patiently until the U.S. beachhead was congested with successive landing waves. They then opened fire, inflicting severe casualties.

Nepalese warriors are feared by German troops: A Gurkha soldier brandishes his weapon of choice -- the kukri, a curve-bladed knife. These natives of Nepal had served in the British Army since the beginning of the 19th century. During World War II, 40 battalions of Gurkhas fought in every theater of the war. Gurkha battalions attached to the British Eighth Army took part in the Italian campaign. They were feared by German troops for their ability to strike at any time and place, leaving their victims -- often with their throats cut -- as a sign of their presence.

Japanese troops embed themselves in rock and wait to attack U.S. Marines during the battle of Iwo Jima: A U.S. assault team warily clears a cave on Iwo Jima. Though dominated by 556-foot Mount Suribachi, the island's greatest defensive potential lay along a plateau two and a half miles to the north. General Kuribayashi Tadamichi located his best forces there among a nightmarish jumble of upheaved rock, gorges, caves, and ridges. The Japanese took full advantage of Iwo Jima's porous volcanic rock to burrow underground beyond the reach of U.S. heavy guns. Above ground, blockhouses with five-foot concrete walls and a multitude of pillboxes awaited U.S. Marines. These American forces had no alternative but to assault them one by one with flamethrowers and demolitions.

The Allies continued their advance into the German homeland, forcing the German army to begin conscription of boys as young as 16. Go to the next page for a detailed timeline on these and other important World War II events that occurred from February 24, 1945, to March 7, 1945.