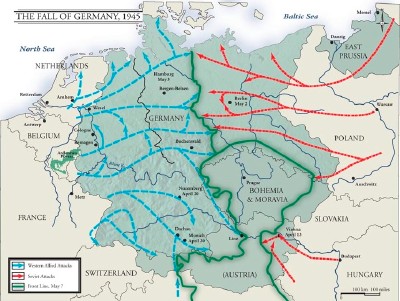 It was the beginning of the end of World War II when General Patton and his American troops liberated the Nazi concentration camp at Ohrdruf, Germany, on April 4, 1945. The World War II timeline below summarizes important events that occurred during the war from April 3-9.

April 3: The Red Army lays siege to the Slovak city of Bratislava in an effort to drive out German forces. The Soviets will liberate the city the following day.

Washington announces that General MacArthur and Admiral Nimitz will command land and sea forces, respectively, for the Allied invasion of Japan.

April 4: American troops liberate the Nazi concentration camp at Ohrdruf, Germany. Upon witnessing the carnage at the camp, a disgusted General Patton assembles local townspeople for a viewing.

April 5: Soviet Union foreign minister Molotov puts the Japanese on notice that the USSR does not intend to renew the 1941 nonaggression pact between the two nations.

The Japanese high command orders its entire Second Fleet to make a run against U.S. forces off Okinawa.

April 6: Yugoslavian forces under the government of Josip Broz Tito take control of the Bosnian capital of Sarajevo.

A fierce air and naval battle erupts off Okinawa. Japanese kamikaze pilots rain from the sky.

April 7: For the first time, the RAF launches bombing raids on Berlin from Allied bases in mainland Europe.

For the first time since the Allied capture of Iwo Jima, the island is successfully utilized as a base for operations against the Japanese home islands.

April 9: The German fortress at Königsberg falls to the Soviets.

Some 300 die when a bomb-laden Liberty ship explodes in the harbor at Bari, Italy.

The final offensive on the Italian front is launched by a multinational troop contingent that includes soldiers from Africa, Asia, Europe, and the Americas.

Below are more highlights and images that outline the events of World War II and show the details of the fall of Nazi Germany, as well as the heroic actions of U.S. Army second lieutenant Daniel Inouye.

Allies close in on the Third Reich on both fronts: Despite Allied setbacks at Arnhem in September 1944 and the Ardennes that December, the fate of the Third Reich was now inevitable. In the West, the Allies crossed the Rhine River in March 1945, with armored forces striking deep into Nazi Germany. In terms of scale and ferocity, the major fighting still raged on the Eastern Front, where the Red Army was rapidly overrunning Eastern Europe. Warsaw fell in January and Vienna in April. On April 16, 2.5 million Soviet Union troops, 6,250 armored vehicles, and 7,500 aircraft launched the great offensive toward Berlin, which ended at the Reichstag six weeks later.

U.S. Army second lieutenant Daniel Inouye earns the Congressional Medal of Honor: On April 21, 1945, during combat near San Terenzo, Italy, U.S. Army second lieutenant Daniel Inouye was shot in the abdomen. He continued to lead his platoon while bleeding. After his right arm was shattered, he threw a grenade at the Germans with his left hand. Inouye earned the Distinguished Service Cross but spent 20 months in the hospital, where his right arm was removed. A review of the military records of the 442nd Regimental Combat Team, a Japanese American unit, 50 years later identified 20 members who were blocked, due to prejudice, from receiving the Congressional Medal of Honor. U.S. senator Inouye of Hawaii was among them. This infraction was rectified on June 21, 2000, when he and 19 others from the 442nd were awarded the medal.

Liberated Jews die from typhoid fever at the Bergen-Belsen concentration camp: "They are Jews and are dying now at the rate of three hundred a day," British soldier Peter Coombs wrote after liberating the Bergen-Belsen concentration camp. A typhoid fever epidemic had been sweeping through the camp, claiming thousands of lives, including that of diarist Anne Frank, by the time British troops arrived on April 15, 1945. A sign at the site of the camp (and a nearby sign in German) declares, the liberators discovered more than 10,000 corpses throughout the camp. British troops forced captured guards to bury the diseased bodies without the use of protective gloves.

Russian troops liberated the notorious Buchenwald concentration camp on April 11, 1945. Continue to the next page for a detailed timeline on this and other important World War II events that occurred from April 9, 1945, to April 15, 1945.

Liberation of the Camps

On April 15, 1945, British forces entered the Bergen-Belsen concentration camp near Celle, Germany. Troops already hardened by many months of campaigning were nevertheless appalled by the horrors that lay within.

During the following days, the soldiers buried 23,000 bodies on-site, necessarily employing bulldozers for this huge task after their initial use of the former SS guards proved totally inadequate. Meanwhile, 29,000 of the traumatized, diseased, and starving survivors were gradually evacuated. Following delousing and washing by co-opted German nurses, many inmates were treated by British military and civilian medical staff in the Wehrmacht's large barracks complex at nearby Bergen-Hohne. However, several thousand of these people subsequently died.

Despite the camp's liberation, the daily death rate at Bergen-Belsen from April to May averaged about 450. As each hut was cleared, it was burned down in an attempt to stem the ever-present threat of typhus. In November, camp commandant Josef Kramer, SS wardress Irma Grese, and nine other Bergen-Belsen guards were sentenced to hang for their heinous crimes. In late April, at Dachau in southern Germany, General Patton's Third U.S. Army encountered similar results of the Third Reich's barbarous policies. It liberated what had been the very first of Germany's principal Konzentrationslagers. At Dachau, the young GIs were so incensed by what they found that they summarily executed many of the guards on-site, including members of the SS.

The Allies discovered more and more concentration camps, in which most of the living and dead prisoners were Jews. The Allied military authorities largely ignored instances of revenge beatings and killings of camp guards by those former prisoners still fit enough to carry out such action. Despite protestations of innocence and ignorance, many local German civilians were forced by the Allies to view the camps that existed close by. Civilians also were conscripted to bury the thousands of dead therein. Meanwhile, even greater horrors were emerging in Poland, as the advancing Red Army began to reveal the Nazis' extensive network of extermination camps.