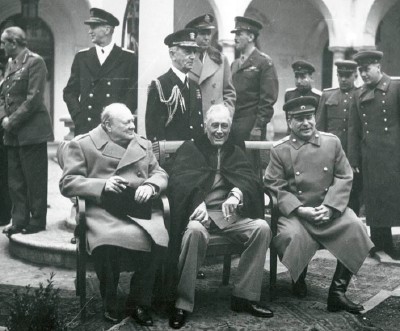 Germany and Japan, and British and American aircraft firebombed the city of Dresden. The World War II timeline below summarizes important events that occurred during the first two weeks of February 1945.

February 1: The USAAF launches a series of bombing raids on Iwo Jima, softening the island's Japanese defenses in preparation for a U.S. Marine ground assault.

February 4: Allied military leaders announce that they have cleared Belgium of all Axis forces.

February 4-11: Allied leaders Franklin Delano Roosevelt, Winston Churchill, and Joseph Stalin meet at Yalta (on the Crimean Peninsula) to plan the final phase of the war.

February 5: In Greece, recently liberated from the Axis yoke, Communist forces surrender their weapons to the new government.

February 6: Tens of thousands of German civilians flee Breslau before the westward advance of the Red Army.

February 9: The British 26th Indian Division captures Ramree Island, a strategically important Japanese base off the coast of Burma.

February 11: Reich officials remove Nazi Germany's 100-ton national gold reserve from Berlin and stash it in an Eisenach salt mine.

February 12: All German women between the ages of 16 and 60 are called up for service in the Volkssturm, the German people's army.

February 13: The German garrison at Budapest surrenders to the Red Army's Second Ukrainian Front. This follows a hard-won, 45-day battle in which 35,000 German prisoners of war were taken.

Below are more highlights and images that outline the events of World War II and show the details of the Yalta Conference, as well as the allies bombing of Dresden in the mid-1940s.

Yalta Conference decides fate of Nazi Germany and Eastern Europe: Franklin Delano Roosevelt, Winston Churchill, and Joseph Stalin (the Big Three) met for the second and last time from February 4 to February 11, 1945, at Yalta on the Crimean Peninsula. Although Franklin Delano Roosevelt was exhausted, Joseph Stalin refused to travel any farther west than Yalta. In negotiations for the fate of Nazi Germany and Eastern Europe, Joseph Stalin had the advantage since most of that area was already in Soviet Union hands. He was, therefore, able to violate the promises he made about free elections in Poland and democratic governments in the liberated states of Central and Southeastern Europe. The Soviet Union leader confirmed his prior promise to enter the war against Japan. Joseph Stalin also reduced his demand for all 16 Soviet Union republics to be represented in the United Nations to two: the Ukraine and Belorussia.

Allies firebomb Dresden and kill approximately 30,000 people: The beautiful German city of Dresden was known as the "Florence of the Elbe" before it suffered a series of bombings in 1945. The heaviest of these were conducted by British and American aircraft from February 13 to February 15. These bombings caused firestorms that destroyed much of the city and killed approximately 30,000 people. Outdoor temperatures reached as high as 2,700 °F, making it impossible for people to escape from their doomed homes. The military efficacy of the bombings has been questioned. Dresden was poorly defended from air attack at times, and its industries were mainly on its outskirts.

The month-long fight for Manila against the Japanese begins: Gutted buildings bear testimony to the Americans' struggle to capture Manila, Philippines, from the Japanese. General Yamashita Tomoyuki had decided to defend Manila, and Rear Admiral Iwabuchi Sanji implemented Yama-shita's orders. U.S. troops arrived on February 3, 1945, to find the city held by about 21,000 Japanese naval and army personnel. Though General MacArthur initially placed restrictions on U.S. artillery and air support in hopes of avoiding serious damage to the "Pearl of the Orient," fanatical house-to-house resistance made such niceties impractical. The fighting lasted a month, and the city was largely destroyed.

The Allies gained power and delivered a devastating blow to Nazi Germany when they firebombed the city of Dresden. Continue to the next page for a detailed timeline on this and other important World War II events that occurred from February 13-15, 1945, to February 23, 1945.

The threat of a German atomic bomb provoked the initiation of and lent added urgency to the Manhattan Project. In August 1939, German-born refugee Albert Einstein warned President Franklin Delano Roosevelt of the potential for a German bomb. The warnings by Albert Einstein and others were alarmingly plausible because German scientists had been the first to discover nuclear fission, in 1938. Fortunately for the Allies, these fears proved unfounded. While the Germans established two teams to develop nuclear energy and the atomic bomb, the effort went virtually nowhere.

Multiple reasons contributed to this failure. A major setback occurred in 1941 when graphite was mistakenly ruled out as a possible moderator in creating a reaction. German scientists turned instead to heavy water (deuterium oxide), an expensive commodity that was in short supply and was reduced by attacks on the production facility in Norway. Reliance on an inefficient thermal diffusion method for isotope separation proved frustrating. German scientists also grossly miscalculated the quantity of material needed for a bomb. Failure was ensured by the German government's unwillingness to commit to the massive economic effort required for success. Top priority was assigned instead to the V-2 rocket program.

As Allied forces swept across Europe in 1944 and 1945, a scientific intelligence unit called the "Alsos Mission" deduced that the German bomb program lagged at least two years behind the Allies'. German scientists had yet to even reach critical mass with a pile -- which the Allies had done in 1942 -- and were not close to obtaining the bomb.