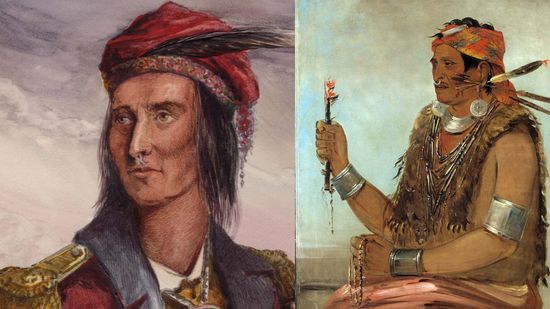 Tecumseh: The Driving Force Behind the Native American Confederacy

Which Native American Nations Are the 'Five Civilized Tribes'?

Should U.S. Revive the 'Powell Doctrine' When Going to War?

Railroad technology has greatly changed the way in which railroads conduct business. Computers have automated much of what used to be done by the work of several people. Learn about some of the developments in railroad technology.

The economy had crashed. The nation was still recovering from World War I, and World War II was on the way. How did the railroad industry manage to make it through the Great Depression?

On the day Ronald Reagan was inaugurated as President, January 20, 1981. the Iranian government released the American hostages, the culmination of months of negotiations.

Washington, Treaty of, an agreement between the United States and Great Britain in 1871 that led to the settlement of various disputes between the two nations.

Wells, Fargo & Company, in United States history, an express company that was active in the development of the Far West.

Whiskey Ring, in United States history, a group of officials and distillers who defrauded the national government of liquor taxes.

Black Power Movement, in United States history, an effort among black Americans to gain control of the institutions that affect their daily lives by acquiring independent economic, social, and political power.

Counterculture , a set of behaviors and beliefs that are radically different from those of mainstream society.

Cuban Missile Crisis , a confrontation between the United States and the Soviet Union, October 22 - 28, 1962, that threatened to precipitate nuclear war.

Iranian Hostage Crisis, a diplomatic conflict caused by the holding in captivity of United States embassy personnel by Iranian militants from November 4, 1979, to January 20, 1981.

SALT, in international diplomacy, the common name for negotiations and treaties between the United States and the Soviet Union intended to limit strategic nuclear weapon strength of each nation.

War Powers Act, the common name for the War Powers Resolution, which was passed by Congress in 1973 as a check on the President's war powers.

The Presidential election of 1960 was held in an atmosphere of strained international relations and increasing racial tension in the United States.

President Nixon began his term of office in 1969 with a pledge to seek peace abroad and tranquility at home.

The nation's economy continued to grow in 1989, although at a slightly slower rate than in the preceding five years.

With the end of the Cold War, the United States concentrated its attention on the economy.

As 2007 comes to a close, it's fascinating to take a look back and see how things have changed. A century ago, most of us could only expect to live until about 50! Check out this list of some of the major events of 1907.

'American Bandstand' hit the airwaves, and the Russians launched 'Sputnik'. 1957 was a year that saw the rise of Elvis and the post-World War II baby boom in the suburbs. Read about these and more in our list of 17 bits of nostalgia from 1957.

This World War II timeline highlights important dates from January 1941 to June 1941. On June 22, 1941, Germany launched the largest invasion in the history of the world when they began war with Russia. Follow the events of World War II and the German invasion.